Bladder outlet obstruction (BOO) is a blockage at the base of the bladder that reduces or prevents the flow of urine into the urethra, the tube that carries urine out of the body1 . Numerous gender-specific etiologies are responsible for bladder outlet obstruction. BOO may be induced by specific functional and anatomic causes. The resulting obstruction frequently produces lower urinary tract symptoms (LUTS), although the degree of bother by LUTS is highly variable and not predictable on the basis of the specific inciting etiology2 . Induced LUTS symptoms may be predominantly obstructive, irritative, or often a combination of both. Typically, obstructive symptoms include hesitancy, sensation of incomplete bladder emptying, diminished urinary stream, and post voiding urinary dribbling.Irritative complaints include urinary urgency, frequency of urination, occasional dysuria, and nocturia. Rarely are symptoms related to BOO isolated; often the individual experiencing LUTS presents with a variety of mixed symptoms of obstruction and irritation. BOO may also occur in the complete absence of symptoms and be first identified in the scenario of urinary retention or decompensation of the upper urinary tracts. BOO often occur in both male and females; it is more common in aging men. urodynamic evaluation and pressure flow evaluation is the gold standard diagnostic tool, other modalities may also be used, including post void residual analysis, urinary flow rates, cystoscopy, and selected radiologic ones. Patient self-appraisal of symptoms using various inventories such as the American Urologic Association Symptom Index3 or the International Prostate Symptom Score is relevant to the initial assessment and subsequent follow up. Analysis of secondary symptoms of obstruction in women is often performed using a subjective symptom appraisal and is determined urodynamically, assessing the pressureflow relation during voiding. The complete assessment of LUTS arising from BOO often includes several of these modalities to fully define the obstructive impact on the individual's urinary function and quality of life4 . There are a number of treatment options in both male and female patients with bladder outlet obstruction. The treatment options in male patients includes watchful waiting5 (A strategy of management in which the patient is monitored but receives no active treatment), medical treatment which includes alpha blocker therapy which inhibit contraction of prostatic smooth muscle and finasteride therapy, an enzyme inhibitor that lowers prostatic androgen levels and decreases prostate size, surgical treatment which includes balloon dilation (A catheter with a balloon at the end is inserted through the urethra and into the prostatic urethra. The balloon is then inflated to stretch the urethra narrowed by the prostate), Transurethral Incision of the Prostate (TUIP) an endoscopic surgical procedure in which patients with smaller prostates (<30 g) is inserted through the urethra to make one or two cuts in the prostate and reduce the constriction on the urethra, Transurethral Resection of the Prostate (TURP) is an surgical removal of the prostate's inner portion by endoscopic approach through the urethra. This is the most common and the gold standard of treatment and open prostatectomy is a surgical removal of the prostate via an incision in the lower abdomen. The main treatment options in females are urethral dilatation under local or regional anaesthesia. Alpha blockers is currently considered the preferred treatment alternative for those individuals who lack absolute indications for surgery. Although alpha blockers have proved to be very efficacious in males6, 7 but very few studies are done to prove the efficacy of alpha blocker in females.8 This observational, cross sectional descriptive study provides an insight into the assessment of the treatment pattern, clinical outcome and quality of life in patients with Bladder outlet obstruction in a tertiary care teaching hospital.

The study was approved by the Institutional ethics committee at kasturba hospital, manipal. A suitably designed Informed Consent Form (ICF) in different languages namely English, Kannada and Malayalam was prepared and used for the purpose of the study. In order to record the data for the study, a separate Case Record Form (CRF) was designed and used, which contains the details of the patients demographics, medical history, medication history, final diagnosis, laboratory investigations, study specific investigations, patient outcome analysis chart, adverse event reporting card, discharge medication and details of follow up visits. The American Urological Association Symptom Score3 (AUASS) was used to assess the severity of urinary symptoms and to check the effectiveness of the treatment. The AUA symptom index questionnaire consists of 7 questions. For the purpose of this study questions 2, 4 and 7 were assigned to irritative symptoms, while questions 1, 3, 5 and 6 were assigned to obstructive symptom sub scores. Total scores were classified as mild 0 to 7, moderate 8 to 19 and severe 20 to 35 symptoms, as recommended by the AUA measurement committee3 . This questionnaire has been adopted worldwide and it is also known as the International Prostate Symptom Score (IPSS). The quality of life questionnaires4 were classified as delighted with score (0), pleased with score (1), mostly satisfied with score (2), mixed with score (3), mostly dissatisfied with score (4), unhappy with score (5) and terrible with score (6) was used to assess the quality of life of the patient with bladder outlet obstruction.This was a randomised controlled study conducted in the Dept. of Urology of Kasturba Hospital, Manipal from September 2008 to April 2009. Our first step was to identify the female patients with bladder outlet obstruction and male patients with BPH during ward rounds or with the help of the physician. Once the patient was identified, they were enrolled according to the study criteria and subject information sheet was explained in detail to the patient or patient?s legally acceptable representatives and written inform consent was obtained from qualified patients prior to their enrolment. A detailed history, clinical examination, study specific investigations which includes Maximum Flow Rate (MFR), Post Voidal Residual Volume (PVR) and bladder thickness was done and the follow up details for all the patients was recorded in the CRF followed by assessment of American Urological Association symptom score (AUASS). The treatment patterns were analyzed with respect to medical treatment or surgical procedures adapted to the patient. Medical treatment includes the various drugs like alpha blockers, 5-alpha reductase inhibitors, and combination of both or sometimes anticholinergic and the surgical procedures include Transurethral Resection of the Prostate (TURP), cystoscopy and dilatation, bladder neck resection etc. The incidence of bladder outlet obstruction was obtained in terms of gender and age group wise distribution. The occurrences of urinary symptoms were analyzed based on the number of patients presenting with each symptoms. The co morbidities most commonly associated with bladder outlet obstruction were assessed based on number of patients presented with co morbidities. The patterns of treatment the patient received such as medical or surgical treatment and drug class implicated, compliance, benefit and adverse effects of each therapy were analyzed. Outcome analysis of different treatment patterns were based on percentage of improvement in the AUAS score, MFR (>25ml/s), bladder wall thickness (<2.5mm) and PVR values (nil) after treatment. Female patients were randomised into two groups? first group of patients receiving (0.2 mg of tamsulosin) while second group of patients receiving (0.4 mg of tamsulosin) in order to assess the safety and efficacy of 0.2 mg and 0.4 mg of tamsulosin in female patients with bladder outlet obstruction. The clinical outcome of this therapy in terms of both subjective and objective improvement was evaluated by estimating the improvement in the AUASS, MFR, and ultrasound reports like bladder wall thickness and PVR values, before and after treatment in both groups and the quality of life in the female patients with bladder outlet obstruction was evaluated by using the quality of life questionnaire.

The author?s wishing to thank staff of urology department and administrative staff of Kasturba Medical College, Manipal University, Manipal for their technical support and encouragement. 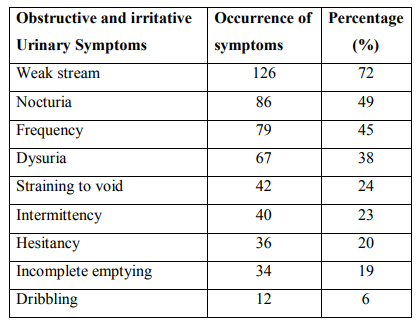 .5. Drug Class most commonly prescribed in patients with bladder outlet 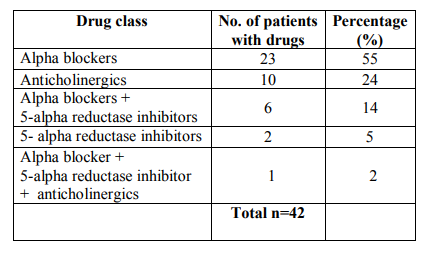 Table.6.Drugs implicated in the medical treatment with bladder outlet obstruction. 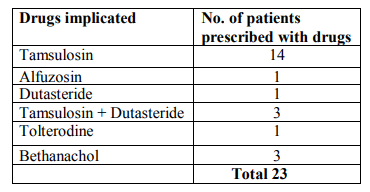 Table.8. Objective and subjective improvement for all types of treatment in bladder outlet obstruction. 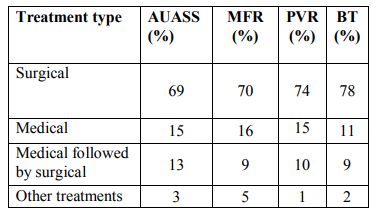 Figure 1 Safety and efficacy of tamsulosin in female patients with bladder outlet obstruction. 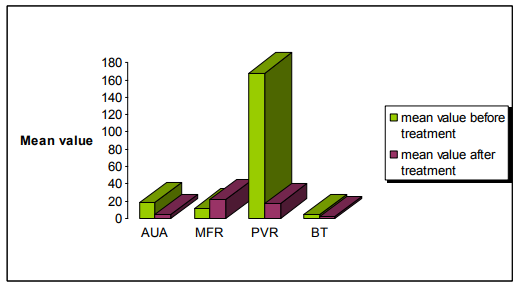